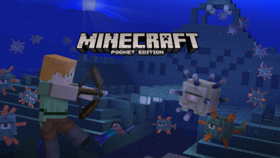 Alpha 0.16.0, the first release of the Boss Update,[1] was a major update to Minecraft: Pocket Edition that was released on October 21 and 25, 2016. It added many new features, such as commands, beacons, ocean monuments and guardians, as well as the Wither and elder guardian.

The update was intended to be released on all platforms on October 12, 2016 when it was discussed at MINECON 2016, however, near the intended time of release, a critical bug was discovered, forcing the release to be delayed by a few days, and the iOS release did not come out until 4 days after the release date for the other platforms due to a long certification process.

In addition, the update was the last in the Alpha development phase of the game – the next update, 1.0.0, would mark the "full release" of Pocket Edition.

From released versions before 0.16.0